The world of music production is quickly evolving – and it’s recently experienced two game-changing introductions: MIDI 2.0 & MIDI Polyphonic Expression (MPE). This article covers what these changes imply, an overview of the technicalities involved, and how they will change the face of music forever.

MIDI (or Musical Instrument Digital Interface) is a communication protocol that was created in the early ‘80s that enables digital music equipment to communicate with one another. Its invention allowed a MIDI instrument to generate a digital MIDI message that could then trigger a note on another instrument (such as a synthesizer).

Dave Smith (the founder of Sequential) & Ikutaro Kakehashi (the founder of Roland) are attributed as the founders of MIDI. Hear Smith tell the tale of how MIDI was born in this 6-minute clip below.

Fast forward to today – and MIDI is at the forefront of music production. The most common use you’ll find today is a MIDI controller such as a keyboard, connected to a DAW such as Ableton. The keyboard allows producers to intuitively input chords, melodies, and even drums into their DAW. Check out our roundup of the best MIDI keyboards of 2021 here. 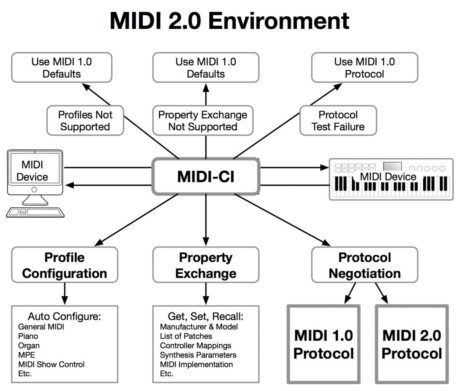 Since its creation in the 80’s – the MIDI protocol has remained unchanged, despite exponential technological advancements in other fields – especially software. This is a testament to the simplicity & effectiveness of Smith & Kakehashi’s creation.

However, MIDI 1.0 faced a few challenges, that the creators of MIDI 2.0 set out to overcome. Here are the three biggest highlights of this new technology below: 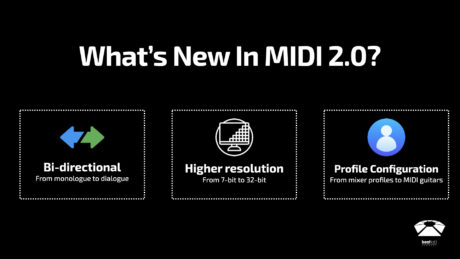 With MIDI 1.0, messages only went in one direction – from a transmitter to a receiver. With the advent of MIDI 2.0, the conversation changes from a monologue to a dialogue. This helps devices auto-configure themselves to work together. Also using the new MIDI-CI (Capability Inquiry), MIDI 2.0 gear can detect if a device is not MIDI 2.0 compatible – and downgrade to using MIDI 1.0 (backwards compatibility)

One of the limitations of MIDI 1.0 was its 7-bit low resolution. This left the range of parameters such as velocity and automation controls to be limited between the numbers of 0 and 127. Due to this limitation, MIDI controllers have also had lower resolution mappings to match. However, MIDI 2.0 introduces an enhanced, 32-bit resolution, meaning vastly more resolution – giving a smooth, continuous, “analog” feel. This in turn encourages controller manufacturers to create new tools to match this leapfrog advancement.

With MIDI 2.0, MIDI gear can now have different profiles, so its configuration can be altered depending on the use case. For example, if a control surface queries a device with a “mixer” profile – the controls will map to faders, panpots, and other mixer parameters. However, if the same control surface is set to a “drawbar organ” profile, the same device will be mapped with virtual drawbars and other keyboard parameters. This will also allow non-standard devices such as MIDI guitars to integrate with setups much more easily.

While MIDI 2.0 has been announced, the integration and flow-through effects into everyday software & hardware will take some time. Currently, Roland’s A-88 MKII is the only MIDI 2.0 compatible controller in the market. As drum machine legend Roger Linn put it “The vast majority of what people really want to do has already been made possible by MIDI 1.0. This industry moves very slowly, and we have a lot of small developers who don’t have the resources to support every standard, so MIDI 2.0 might take a long time before it is widely in use.” 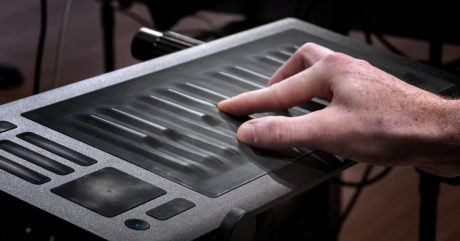 MPE is another gamechanger in the electronic music world that will allow for new and interesting changes in controllers & synth design immediately.

MPE stands for MIDI Polyphonic Expression, and it’s a method of using MIDI to allow multidimensional controllers (MDCs) to control multiple parameters (such as pitch bend, vibrato, timbre, volume) of every single note separately. Currently, MIDI notes that are played at once (such as a chord), travel through the same MIDI channel. Therefore, when channel-wide messages such as pitch bend are applied, it bends the pitch of every note being played. MPE assigns a MIDI channel for each note so that those parameters can operate independently per note.

The best way to understand this is to watch it in action. Currently, there are two companies spearheading the MPE Movement – ROLI and previously quoted Roger Linn. ROLI is best known for their innovative keyboard – the futuristic-looking Seaboard (pictured above). However, their new LUMI Keys, launched at the end of 2020, looks deceptively similar to a simple MIDI keyboard until you look closer. Notice how the user is able to hold a note and then apply vibrato to only that note, for example, in the video below.

MPE requires MPE-compatible software to work. The good news for Ableton Live users is that Live 11 was released with full MPE compatibility. Watch MPE being used in Ableton Live 11 to recreate the iconic THX sound in the video below.

What Does This Mean For Electronic Music Creation?

The bottom line for the producers of today is that these new technologies are going to help electronic musicians express themselves more easily. MIDI 2.0 is going to be a new platform for manufacturers to build upon, and MPE will allow for intuitive gestures to alter a sound rather than tedious programming. At Beat Lab Academy, we are excited that these changes are going to help support more musicians to proudly refer to their laptops as their instrument – and thereby create sounds that have never been heard before.

If you’d like to learn more about music production with Ableton Live with access to online live study groups, find out which of our programs is right for you.

Diveakssh Schae August 12, 2021
PrevPreviousGetting Your Tracks To The Finish Line – “Scenery” On How To Get It Done
NextModular On The Spot – Get Tangled OutdoorsNext